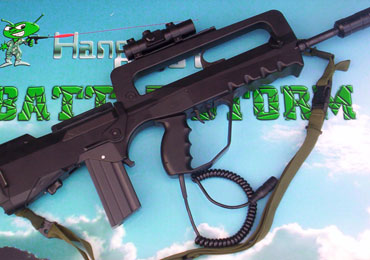 This is a replica of the Famas F1 assault rifle developed in the early 1970's, adopted by the French army in 1978 and known to the French soldiers as "Le Clairon" (the bulge). It has seen some action during the operation "Desert Storm" in Kuwait in 1991, as well as in some peace-keeping operations in the mid and late 1990s, where it has proved itself as a reliable and trustworthy weapon.